When the Levees Broke: Spike Lee's Sonogram of an American Stillbirth 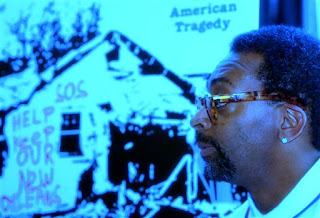 Both Truman Capote and Saint Teresa of Avila made copious notes on the tearful taxes that come with the cosmic payoff of answered prayers. I don't know if the Rt. Rev. James Dobson and his Pharisees-On-The-Family minion Stuart Shepard are aware of the havoc they might have caused by asking their flock to pray for rain in order to sabotage a certain political convention.
Their prayers were answered. Only thing, that "Abundant rain, torrential rain, urban and small stream flood advisory rain" in Shepard's venomous supplication during his "Spotlight" broadcast, pounded the Gulf Coast instead. Not Denver. The powerful eyewall of rain and wind that fell in New Orleans, Baton Rouge, and Plaquemines Parish, also set its' sights on St. Paul, Minnesota, resulting in Hurricane Gustav's collateral disruption of the Republican National Convention's opening ceremonies.

Fast Forward to Back In The Day: Chief Rocker Busy Bee 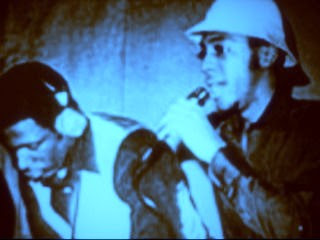 That grinding sound in your ears is the gears of nostalgia down-shifting into a golden backspin. Forty may be the new 30, but 2007 is not the new and improved 1977, our Twin Towers still intact. This Scared New World has us anxiously coveting the lost continent known as Before. Before the echo of a modern Pleistocene Epoch—the New Ice Age—sent peals of Bling! Bling! ricocheting around the world; before Jay-Z became not only Jigganational but hip-hop's Magna Carter; before 9-7-96 and 3-9-97 bodied the innocence of "Rapper's Delight"; before nine bullets and a hot mix tape parlayed itself into a blue-chip stock portfolio at Goldman Sachs.