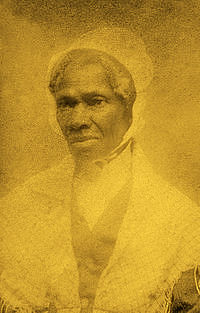 Check it: if there was no Sojourner Truth (former slave turned-abolitionist and human rights activist from the 19th Century), there would be no Fannie Lou Hamer, no Shirley Chisholm, no Bella Abzug, no Betty Friedan, no Angela Davis, no Gloria Steinem, no bell hooks, no Hillary Rodham Clinton, no Sonia Sotomajor, no Oprah Winfrey, no Michelle Obama. Sojourner Truth was the blueprint for their skyscraper of empowerment, the rocket fuel in their socio-cultural jet-packs.

Ms. Truth was the truth; an eloquent Mistress of Historical Ceremony, whose "Ain't I A Woman" speech stands as a extemporaneously magnificent monument to her powerful emcee skills. "Ain't I A Woman" is a testament for all Americans--Black, White, Latino, Asian, Native American, men, women, young and old--who believe that freedom is a Providential right. Not a racially or gender-bound aristocratic privilege.

Marius Robinson--an abolitionist who worked with Ms. Truth and attended Women's Convention in Akron, Ohio, where Ms. Truth gave this stirring oration on 29 May 1851--recounted the historic event for the 21 June 1851 issue of the Anti-Slavery Bugle. Mr. Robinson wrote:


"One of the most unique and interesting speeches of the convention was made by Sojourner Truth, an emancipated slave. It is impossible to transfer it to paper, or convey any adequate idea of the effect it produced upon the audience. Those only can appreciate it who saw her powerful form, her whole-souled, earnest gesture, and listened to her strong and truthful tones. She came forward to the platform and addressing the President said with great simplicity: 'May I say a few words?' Receiving an affirmative answer, she proceeded:"

"I want to say a few words about this matter. I am a woman's rights. I have as much muscle as any man, and can do as much work as any man. I have plowed and reaped and husked and chopped and mowed, and can any man do more than that? I have heard much about the sexes being equal. I can carry as much as any man, and can eat as much too, if I can get it. I am as strong as any man that is now.

Read more »
Posted by Bmc at 7:21 PM No comments: Links to this post

Whitney Houston (1963-2012): I Know Why The American Nightingale Sings 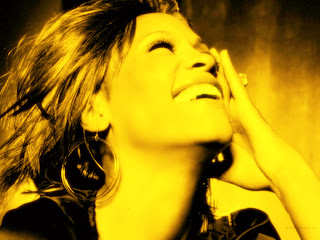 
"While I live will I praise the LORD: I will sing praises unto my GOD while I have any being." Psalm 146:2


"Nightingales are named so because they frequently sing at night as well as during the day. The name has been used for well over 1,000 years, being highly recognizable even in its Anglo-Saxon form – 'nightingale'. It means 'night songstress'...Its song is particularly noticeable at night because few other birds are singing..."


-Wikipedia entry for Luscinia megarhynchos, better known as the "Nightingale."


Less than twenty-four hours before the Grammy's, Whitney Elizabeth Houston--the pride of Newark, N.J., and the greatest singer of her generation--was found dead in a luxury suite at the Beverly Hilton hotel. Houston was 48-years-young.

The cause of death at the time of this writing, is unknown and when it is known, it will still hold mystery. Mystery that the gossip (or sloppit, as I call them) mongers will try to unravel by rumor, innuendo, assumption, and ignorance. And even then, they still won't know.

However, Whitney Houston's death will still be our loss.

Like Michael Jackson, Marvin Gaye, Billie Holiday, Richard Pryor, Don Cornelius, Kurt Kobain, the painter Francis Bacon--and countless others--Whitney Houston died from a broken heart. Not drugs, not suicide, not a gunshot, not an Aston Martin gunning through a Laurel Canyon barricade into the twilight expanse of a callous Hollywood night. That detail is set aside for coroner reports, which in turn feed legal issues, mortuary documents, and gossip. The heart is another story altogether. The heart is the fleshy, fragile, and percussive trophy case of passion. A myocardial trophy case not built to withstand the arbitrary crosswinds of instant adoration, wealth, and ultimately, rejection. 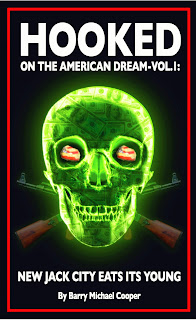 
From pyre to gyre, revolving rings of crackling fire,
Shimmering waves of orange flame,
A gory island's infinity, cast in the light of incandescent pain;
Blood that licks the shores of Africa's terrain,
The innocent have nowhere to hide,
Porous fear seeps into the back-channel's scarlet tide;
The undertow of abduction swirling in the shock of cruel currents,

A starless night filling the sea with spectres of unwilling servants,
Mapping the Middle Passage's watery, sepulchered plains;
Death before dying, as we arrive on Mystery's Shore;
Reviving just to survive and maintain,
History knocks; we search for Soul Free while body-locked
and forced onto the auction block (the 1st American peep show),
Bound in shackle and chain; Silhouetted in bloody shadows,

Brush-stroked in the Stain of America's Shame.


Aeons pass as Providence anoints a Sepia King,
Justice stands far away from him, as Freedom struggles to sing; the eyes of Justice shut to truth, and deaf to the song,
Rising with her blindfold in the mourning; did she sleep too long?
(And sometimes the voice of Justice is just all wrong);

From pyre to gyre, revolving rings of crackling fire,

America smells the smoke of anomie, but ignores the alarm,
Choking on the political soot of overheated and rhetorical harm
Only to be consumed in the incineration of its own hypocritical desire,
Burning in the flaming contradiction of self-righteous fire... 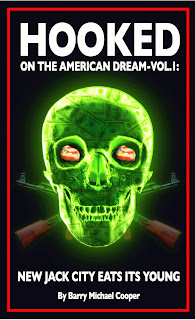 My debut anthology of street journalism from the 1980s (and more current essays), "Hooked On The American Dream-Vol.1: New Jack City Eats Its Young," is now available on Kindle/Amazon. Click here to go to the Amazon site.

Posted by Bmc at 8:37 PM No comments: Links to this post