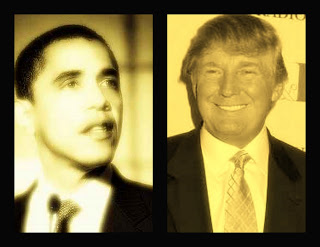 President Obama's "Trump" Card (or, "The Donald's Transparent Fraudulence as an Invisible Bully) 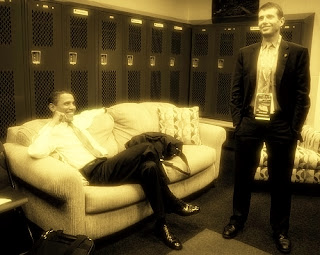 Trump: Mr. President, David. My two most favorite people in the world. And I mean that.

President Obama: You sure about that? A little birdy says you told a crowd of folks at the Trump International Hotel and Tower, that--and I quote--"Our leaders are stupid, they are stupid people.It's just very, very, sad." An expletive-filled rant. Wow. It's like that, D-Money? 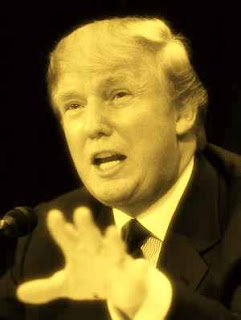 Trump. Come on, Mr. President. The Krug was flowing, I was talking to a bunch of drunks; it boils down to two words: Vegas, baby. And don't believe everything you read on AP. I love you guys. You know that. Dave-O, help me out here. 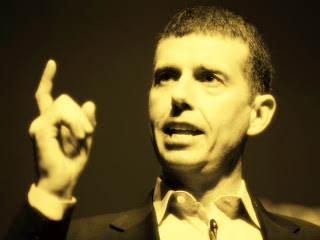 David Plouffe: The man. The myth. The coif. The Donald. Dude, you are most definitely the man of the hour right now; still, I don't think you love us more than Hot Birther Mama Orly Taitz. And since you jumped into the soup D-Money, me thinks old girl is crushing on you something serious. You two would make the perfect couple. You know...the hair? 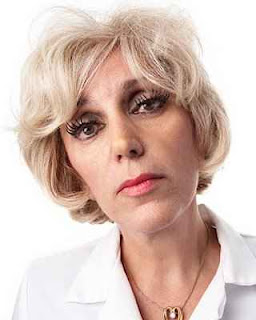 Read more »
Posted by Bmc at 8:48 PM No comments: Links to this post

Mediaite-GOP Official: President Obama Is From the Planet of the Apes


Today’s installment of “heinous, unacceptable racism disguised as ‘jokes’” features a Republican official on Orange County, California, President Obama, and monkeys in photoshop. GOP official Marilyn Davenport is coming under fire for sending other Republican officials an email depicting President Obama as a chimpanzee, in the arms of chimpanzee “parents,” claiming, “Now you know why– no birth certificate! [sic].” Davenport is sticking to her guns, blaming the media for making too much of a fuss.

Among Davenport’s detractors (including, one would hope, “everyone else”), local news station KCAL caught up with former California Republican chairman Michael Schroder, who correctly posited: “no average person would send this out and feel comfortable with this, that this was just a joke.” Then again, Schroder also notes Davenport doesn’t come into this embarrassment with a clean slate– among the people in Orange County Republican politics she has defended are an official who sent an email with an illustration of the White House covered in watermelons and an official who opposed the installation of grass near beaches on the point that “grass attracts Mexicans.”


Forty-five years ago, English model Jill Kennington agreed to appear in an art-house film—one that would memorably capture the energy of London’s 1960s fashion and art scenes. Michelangelo Antonioni’s 1966 classic, Blow-Up—his first English-language film—was a sensation, and earned the Italian modernist Oscar nominations for directing and writing. Today, Kennington discusses her participation in Blow-Up and the real-world London atmosphere it depicted with Philippe Garner, international head of 20th-century decorative art and design at Christie’s. With David Alan Mellor, Garner has co-written a book that analyzes and contextualizes the film: Antonioni’s Blow-Up. (Steidl).

Philippe Garner: Jill, your role in Michelangelo Antonioni’s Blow-Up created an indelible image that has become emblematic of the London scene in the 60s. How did it happen that you got cast for the film?

Jill Kennington: I remember excited whispers going round London: “Antonioni is going to make a movie here!” He was very well known to me for his beautiful and often strange films, so I was intrigued, but it took a while to understand that he was interested in the London 60s scene—in particular the world of fashion photographers and models. I then often saw him sort of skulking around, not wanting to be noticed, alone, just taking it all in, both in the trendy discotheques, watching, and in my favorite Italian restaurant, San Lorenzo. One day he turned up on a shoot I was doing for Queen magazine at David Montgomery’s studio. I remember there were two other girls; we were introduced, told he was just going to watch and to ignore him. This was very easy, as he just faded away to a gray figure alone at the back. I was a bit disappointed that the shoot was quite abstract and graphic, not typically my type of work. Of course, only when the filming started, with five girls, could I see how that shoot had given him ideas and inspiration.

Posted by Bmc at 9:20 PM No comments: Links to this post

Mediaite-President Obama and The "Birthers"; Clowning The Clowns

George Stephanopoulos scored a major scoop tonight by getting Barack Obama to offer his own insight on the birther controversy recently brought back into the news cycle by the presidential/promotional campaign of reality television host Donald Trump. Stephanopoulos described Obama’s reaction to being questioned about his birthplace: “He grabbed at the chance with a big smile – saying he thinks the whole issue will be a problem for Republicans.

Yahoo News-This Just In: President Obama Is NOT A Wimp...

Yesterday, President Obama delivered some of his harshest criticism yet of his recent battle with Republicans to fund the government.

However, Obama may not have intended for everybody to hear him.

While listening to an audio feed from a Chicago fundraiser Thursday night, CBS News reporter Mark Knoller heard Obama speaking with donors after other reporters had left the room. That's when the president really opened up about his disdain for the recent GOP pushback:

"I said, 'You want to repeal health care? Go at it. We'll have that debate. You're not going to be able to do that by nickel-and-diming me in the budget. You think we're stupid?'" the president reportedly said.
Obama also complained about GOP attempts to attach a bill to the resolution to fund the government that would defund women's health services provider Planned Parenthood.
"Put it in a separate bill," the president said he told House Speaker John Boehner and his staff. "We'll call it up. And if you think you can overturn my veto, try it. But don't try to sneak this through."
The president also made clear he is no fan of Rep. Paul Ryan (R-Wis.), the GOP's Budget Committee chairman.
"When Paul Ryan says his priority is to make sure, he's just being America's accountant ... This is the same guy that voted for two wars that were unpaid for, voted for the Bush tax cuts that were unpaid for, voted for the prescription drug bill that cost as much as my health care bill--but wasn't paid for," Obama reportedly said.
(Click here to read the full story watch the CBS.com video on the Yahoo News website)
Posted by Bmc at 2:36 PM No comments: Links to this post

(Story reported by Bruce Weber for the NY Times)
Gerald A. Lawson, a largely self-taught engineer who became a pioneer in electronic video entertainment, creating the first home video game system with interchangeable game cartridges, died on Saturday in Mountain View, Calif. He was 70 and lived in Santa Clara, Calif.
The cause was complications of diabetes, said his wife, Catherine.
Before disc-based systems like PlayStation, Xbox and Wii transformed the video game industry, before techno-diversions like Grand Theft Auto and Madden NFL and even before Pac-Man and Donkey Kong became the obsession of millions of electronic gamers, it was Mr. Lawson who first made it possible to play a variety of video games at home.
In the mid-1970s, he was director of engineering and marketing for the newly formed video game division of Fairchild Semiconductor, and it was under his direction that the division brought to market in 1976 the Fairchild Channel F, a home console that allowed users to play different games contained on removable cartridges. Until then, home video game systems could play only games that were built into the machines themselves. Mr. Lawson’s ideas anticipated — if they did not entirely enable — a colossal international business.
(Click here to read the full story on the NY Times website. May GOD Rest the soul of this brilliant modern American inventor, and may HE Bless the Lawson family in their time of grief and need.)
Posted by Bmc at 12:33 AM No comments: Links to this post

(Story on James Van Der Zee posted on the Ethnic Roots and Urban Arts website)
JAMES VAN DER ZEE (1886-1983)
James Van Der Zee was born in the town of Lenox, Massachusetts on June 29, 1886. He began his life as a photographer at age 14, when he got a toy camera from a magazine.  He soon learned that he would need a more sophisticated camera with which to take pictures of his family and friends. Van Der Zee was only the second person in his hometown to own a camera.  He was interested in all aspects of photography and learned to develop his own film. This soon let to his job as a dark room assistant. By 1916, Van Der Zee opened his own photographer’s studio in Harlem.
Van Der Zee loved Harlem and admired the lives of blacks in Harlem who lived prosperous and fulfilling lives. His now iconic photographs depicted black life in Harlem. His studio soon became the place to which black celebrities of the day flocked. Among the leading celebrities who were photographed by Van Der Zee included, dancer Bill “Bojangles” Robinson, singer Hazel Scott, boxers Joe Louis and Jack Johnson, and prominent Harlem minister Adam Clayton Powell, Sr.
Van Der Zee was also famous for his photographs of women, who typically shown wearing the latest fashions or as brides or as matriarchs of their families. In fact, Van Der Zee took many photographs of black families, as it was important to him to chronicle the love and continuity of the emerging middle class black family life.
He not only took pictures of life but also of death. He photographed many funerals. In these photographs was where Van Der Zee use double exposure images. He would superimpose images of angles or of the departed into the corner of the photo of their funeral. Van Der Zee’s early experiences with the loss as a young man.  Van Der Zee’s work was in demand due to his technical retouching of photographs, which was generally rare during his time.
(Click here to read the full story on the Ethnic Roots and Urban Arts website)
Posted by Bmc at 3:28 AM No comments: Links to this post

(Story reported by Nekesa Mumbi Moody for the Associated Press/Yahoo News)
NEW YORK – Two of Malcolm X's daughters are unhappy that a new biography alleges their parents' marriage was strained and that their mother — and possibly their father — were unfaithful.
The marriage "was definitely faithful and devoted because my father was a man of impeccable integrity, and I think that most people, if they're not clear on anything, they're clear that he was moral and ethical and had impeccable character," Ilyasah Shabazz said Wednesday.
Ilyasah and Malaak Shabazz spoke to The Associated Press about "Malcolm X: A Life of Reinvention." Author Manning Marable, a highly respected scholar who worked for more than 20 years on the book, died last week of complications of pneumonia just before publication. Malcolm X's daughters did not speak to Marable for the book, which draws upon thousands of interviews, government documents and private papers.
The book has been in the top 10 on Amazon.com's best-seller list, and the print run has been increased from 46,000 to 70,000, according to Viking, an imprint of Penguin Group (USA).
Viking spokeswoman Carolyn Coleburn said the publisher had no comment about the daughters' criticisms.
(Click here to read the full story on the Yahoo News website.)
Posted by Bmc at 8:18 PM No comments: Links to this post