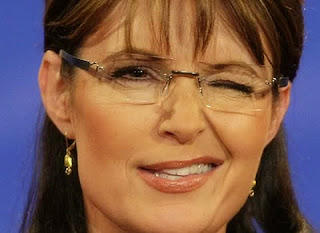 (Failed Alaskan governor, best selling author, hockey mom, gun enthusiast, provocateur of potential political violence; Sarah Palin is a multi-tasking polymorph whose limited worldview in no way shape or form upends her bottomless reserves of unnerving ambition. The lady with the telegenic smile and the eyes of a sociopath owes her overexposed-exposure to Sen. John McClain, and his desperate bid to shift attention away from the Barack Obama Express during the 2008 Presidential Campaign. This was an essay I wrote about the Palin phenomenon, that was published online at the Huffington Post on 22 October 2008.)

We found out two things the night of October 18th, 2008:
1. Republican V.P. nominee Sarah Palin is a good sport.
2. She is down with the GOP (the Gangsta Opportunist Party).

Last weekend, a record seventeen million viewers watched as Gov. Paliin played along with the SNL Weekend News. Amy Poehler spat a catchy gangsta rap -- a song that Palin "refused" to perform, wink-wink -- which included references to: John McCain, Barack Obama, a moose caught in the Northern Lights of an Alaskan drive-by, and the view from her front porch to Red Square. As the yuk-yuks rained down on her pretty head, Palin stayed true to the endgame, raising her hands in the air and waving them like she just didn't care.
Read more »
Posted by Bmc at 10:39 PM 2 comments: Links to this post 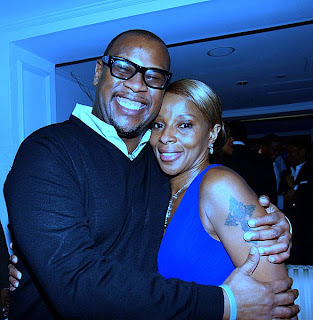 (this is an excerpt from Andre Harrell's memoir, that was tentatively titled, "From Uptown to Nu America: Andre Harrell's Notes on a Revolution". Andre Harrell is the music and entertainment mogul who launched the careers of entertainment pasha Sean "Diddy" Combs, Heavy D, Al B. Sure! Teddy Riley and Guy, and of course, the iconic songstress, Mary J. Blige. I worked on this book with Andre--who I believe to be a true genius in the music industry--for a few years, but in 2008, the publishing company decided not to publish this compelling and insightful memoir. I hope Andre's book sees the light of day, because Uptown Records/New Jack Swing/Hip Hop Soul, is an essential cornerstone in post modern pop culture. This is an excerpt from his book that focuses on the legend known as Mary J. Blige.)

Our Lady Of Glamorous Sorrows:
The Prestige Of Mary J. Blige 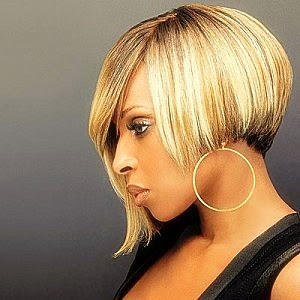 Sunday, the eleventh day of February, in the Year of Our Lord, 2007.

I'm sitting 13 rows away from the stage of the Staple Center auditorium, 13 rows away from TV-Land.  I am surrounded by executive types, and I am watching Mary J. Blige accept her first of three Grammy’s. Nominated for eight awards, Mary won best R&B Album for The Breakthrough, best Female R&B Vocal Performance, and best R&B Song for Without You. MJB looks bioluminescent, as if she was born to give off light and glow in this historic moment. However, Mary's radiance is more than just her outward glamorous appeal. 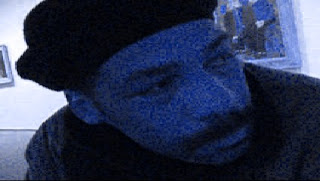 (This is a piece from 2003 issue of The Journal of Urban Youth Culture--a magazine founded by my good friend and famed Michigan State University educator Dr. Carl S. Taylor--on the late Baltimore, Md. fine artist, Larry Scott. Scott--who died suddenly and unexpectedly of a heart attack in 2007--was one of the most prolific artists this city had ever seen. In my opinion, he was the Picasso of Baltimore, Md.)

"He lived so many years with small intervals of recuperation, in visible glory, honored by the world, yet in spite of that, troubled in spirit, and all the more troubled because no one would take his trouble seriously..."
Franz Kafka, "A Hunger Artist"

I am sure that neither Franz Kafka, nor Tupac Shakur have ever met Baltimore painter Larry Scott. Yes, it is quite absurd; one died seven years ago in a shower of nine millimeter mystery and counterfeit love, the other nearly a century ago from savage tuberculosis and public ennui. Yet the viscous that bonds all three is the need to be experienced; that humid, gothic desire fueling the mythic virus known as glitteraticosis, p.k.a. mad fame. Not that Scott, the 46-year-old Newark, New Jersey native and husband, father, and grandfather is sweating the art world for acceptance. His amazing work just wants you to holla if your feel it.