Clarke Peters in Spike Lee's "Red Hook Summer": Spiritual Blackout in the Valley of the Shadow of Death


"For such are false apostles, deceitful workers, transforming themselves into the apostles of CHRIST. And no marvel; for Satan himself is transformed into an angel of light.Therefore it is no great thing if his ministers also be transformed as the ministers of righteousness; whose end shall be according to their works."

"When you look into an abyss,  the abyss also looks into you."

I'm just going to cut to the chase.

Clarke Peters should not only be nominated for an Academy Award for Best Actor, for his bravura interpretation of a conflicted man-of-the-cloth in Spike Lee's gut-wrenching Red Hook Summer, but Clarke Peters should win. Hands down, his portrayal of the complex, multi-layered preacherman  Bishop Enoch Rouse, is by far, one of the most virtuosic, skilled, and almost preternatural performances I have ever seen on film.

I say that having been previously awed by the following: Denzel Washington in both Malcolm X and Training Day, Daniel Day Lewis in There Will Be Blood, Al Pacino in Godfather II and Serpico, Michael Wright in Streamers, Sugar Hill and The Five Heartbeats, Wesley Snipes in New Jack City and Sugar Hill, Burt Lancaster in Elmer Gantry, Allen Payne in New Jack City, Gena Rowlands in A Woman Under the Influence, Chris Rock in New Jack City, Dirk Borgart in Servant, Diahann Carroll in Claudine, Simone Signoret in Room at the Top, George Sanders in All About Eve, Morgan Freeman in Street Smart, Julie Christie in Darling, Michael Douglas in Wall Street, Robert DeNiro in Raging Bull, Tom Cruise in Magnolia, Robert Downey Jr. in Black and White, Richard Gere in Internal Affairs, Keith Carradine and Robert DoQui in Nashville, Jane Fonda in Klute, and Sir Laurence Olivier in The Entertainer.

These are a few of the actors and performances that looped in the screening room between my ears, long after the end credits disappeared.

Still, I haven't seen anything quite like what Clarke Peters created for Red Hook Summer. Of course, it helps that Peters was directed by Spike Lee, who, despite the firebrand label attached to him (and sometimes, rightly so for the right reasons), is one of the greatest filmmakers America has ever produced. James McBride is a screenwriter above and apart; he and Spike's screenplay is a Rorschach-blot-of-a-character study; a man who is a force-of-one against himself. Bishop Enoch Rouse is a lost soul searching for the sacred needle in the profane haystack of his existence. 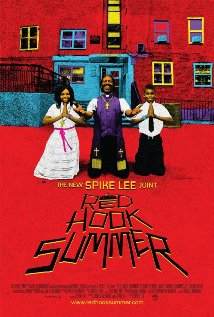 Spike Lee cultivates some strong performances from his entire cast; Jules Brown as Flik, the pre-teen Nietzsche who hates GOD for taking the life of his dad in Afghanistan, while trying to suss out his preacher grandfather (Clarke's Bishop Enoch) and life's absolutes in the screen of his iPad 2; Nate Parker as Box, the neighborhood thug who terrorizes Bishop Enoch and Flik, while ice-grilling his imaginary hip hop career in the cruel summer of his vicious discontent; Toni Lysaith and Heather Simms as mother and daughter Morningstar, trying to hold it down and hold it together in the Red Hook Projects, pasting over their shared grief of a lost family member, with the spiritual epoxy of Bishop Enoch's Little Heaven Church; the always comically profound Thomas Jefferson Byrd, as Deacon Zee, a man who sees Wall Street dreams floating around bottom of a bottle of hard brown liquor; Colman Domingo as Blessing Rowe, the haunted messenger of a horrific plot twist you may never forget.

Yes there is a plot twist, and it's one I won't reveal here. And there are signposts and people from previous Spike Lee Joints that you should discover on your own. I have read some of the reviews on Netflix (yes, Red Hook Summer is streaming on Netflix; they are stepping up their game), and they--like other critics--have bemoaned that Spike skips over important plot points. Not true; Spike Lee's films are more like works of art--similar to a painting by Basquiat, Bacon, or Picasso--whose narrative won't be understood on the initial viewing. The cognitive power of the story begins to pull focus in the second and third screening.

That's what real art is supposed to do; take root and blossom inside your head.

It wasn't until my second viewing of Red Hook Summer, that I heard Clarke Peters's Bishop Rouse lament, "My own father didn't love me," and in another scene, "Sometimes...I don't even like myself." Listening to the tearfully sonorous rasp of Peters's dramatic basso profondo, there is a hint of several generations roiling in the muted shame of unspeakable atrocities. Which made the plot twist not only disgustingly real, but plausible.

However, it's Peters's explosive performance that brings this film alive. His body language speaks to a manic depressive flux of reactions, from rock bottom despair, to penultimate joy. Framed like a High-Baroque painting in 5D, by the sharp cinematography of Kerwin DeVonish, Clarke Peters's smooth mahogany face mirrors a grotesque mask of emaciated beauty; an open window to a very divided soul. Indeed, in the final moments of the film, when Box and his beat-down boys silently walk up behind Bishop Rouse in prayer at the altar, it's staged like a tableau of Red Hook's Sanhedrin about to administer judgment to a false Christ. I was reminded of Guido Reni's crucifixion painting from 1640, Ecce Homo ("Behold the Man"). 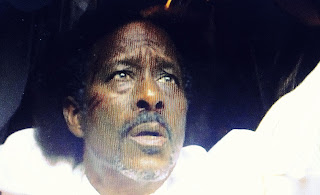 It is integral to the plot, that almost two thirds of Red Hook Summer takes place in the confines of Bishop Rouse's Little Heaven church.

Clarke Peters embodies an unforgettable character in Red Hook Summer, a Spike Lee film that I hope is not overlooked by the Academy Awards. Red Hook Summer--along with Ken Burns's The Central Park Five, and Ava Duvernay's Middle of Nowhere, in a three way tie--gets my vote for the Best Film of 2012. Peters's as Bishop Enoch Rouse is a frighteningly evil man, and all the more so, because on the surface he is kind, quiet, and gentle. A man who is not what he appears to be. A man who may garner your sympathy at the end of the film.

Or maybe he won't.

Bishop Enoch Rouse is a man who is devoured by appetites he could not control, an appetite that swallows him in his own abyss. An abyss that weighed Bishop Enoch's good intentions in the balance of the thoughts and intents of his twisted heart. And like King Belshazzar--who asked Daniel to interpret his nightmare in Daniel 6--Bishop Enoch Rouse has been found wanting and empty.

Red Hook Summer is a complex, disturbing, and brave masterpiece. Clarke Peters deserves an Oscar, because he was directed into delivering an indelible performance by one of the most prolific American filmmakers in the last two decades; Spike Lee. Spike is a dude that-- contrary to a few online cinephiles immolating in the smoke and mirrors of their own matchbox pedantry--has not fallen off like a bad bag of dope; instead, he has risen to the top of his game.

If you haven't seen Red Hook Summer--or even if you have seen it--watch it carefully. Watch the film a second time, and look at the little hints; like the man sitting uncomfortably in the back of the church, as he shifts between elation and despair. Or Bishop Rouse's continuous declaration to Deacon Zee of "I have a vision of a big donation to the church." Or Rouse off-hand confession to his spiritually hardened grandson Flik, "My father never loved me," and "Sometimes, I don't even like myself."

Take note of the subtle looks exchanged between Rouse and his daughter Colleen Royale, in the hallway of his apartment, when she drops Flik off for the summer. Looks that may imply (but are never actually stated in the film) Ok, Dad, you have been calling me, and telling me that you have changed; here is your chance to prove it. But...I still kinda hate you. Consider Colleen's cautious and somewhat hesitant query with Flik during their iChat; "I'm am going to ask you something, and I don't want you to lie to me..." Colleen then changes her thought in mid sentence;  "...You been messin' around with any of them fast-ass girls?"

Given what the plot twist, that is Not what Colleen wanted to ask her son.

Take all of these tokens into consideration when the MacGuffin happens, and then think about all of the clues Spike and James have given the audience, without giving the story away. Then consider this is a similar device employed by the legendary Alfred Hitchcock in films like The 39 Steps. Also think about the character map of Bishop Enoch Rouse and it's analogy to Marcello Clerici, the misguided flashpoint of Bernardo Bertolucci's 1970 masterpiece, The Conformist.

This is movie-making at it's finest.

Spike Lee's Red Hook Summer is a hard film to digest, especially for African-Americans--like myself--who were raised in the church. The church is that retreat, that shelter from the harsh rain of American Life, that has gotten us through the storm. It is sacrosanct. It is untouchable.

For the longest time, I interpreted the church as the "House of GOD, which is the church of the living GOD, the pillar and ground of the truth," as the Apostle Paul tells us under the Inspiration of GOD in 1 Timothy 3:15. But with GOD's Grace and much careful meditation and study, I realized that it's not the church but the living GOD, which is the pillar and ground of the truth. Clarke Peters's stellar performance as Bishop Enoch Rouse underscores the fact that he felt that he was the pillar of the church, and in turn, Rouse's anointing would absolve him from any, every, and all sin. Bishop Rouse really believed that he was above the law, even GOD's Law. Rouse's stunning hubris deceived him, which became the beginning of his end, because, GOD Is not mocked; for whatsoever a man soweth, that shall he also reap (Galatians 6:7).

I know there will be much disagreement with this, but that is ok, too. Just don't deprive yourself by dismissing Red Hook Summer. This is modern cinema at the highest level, by a director who continues to let us know that he got mad game.